Encouraging others in appreciation to those who have encouraged him. 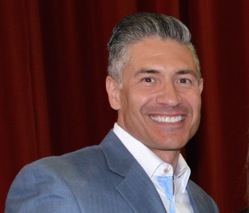 John A. Sirpilla is a 1984 graduate of St. Thomas Aquinas High School, a 1988 graduate of Miami University with a degree in Accounting and a special interest in Psychology and Finance, and a 2000 graduate of the University of Phoenix with a master’s degree in Organizational Management.
In 1992, Johnny became President of Sirpilla R.V. Center, Inc.. Within a few years, he was recognized out of more than 3,000 dealers as the National RV Dealer of the Year for best overall run dealership in the country. In 2003, Johnny was one of the initial acquisitions by Camping World and sold his family business to become part of the executive team to attempt the first RV dealership roll up plan in the industry’s history.

Johnny served as President of Camping World Accessory Stores, a 140-store nationwide retail chain serving the RV industry and was promoted in 2012 to Chief Business Development Officer for the parent company, Camping World and Good Sam with annual sales of nearly $4 billion.  Over the 14 years at Camping World, he had responsibility over dealership operations, new store acquisitions and new location market selection and construction. Additionally, his teams oversaw Call Center Operations, Buying & Merchandising, Parts and Accessories Inventory, Distribution Center Supply Chain, Wholesale Distribution and acquisitions relating to product development and distribution.  In addition to this role, he was also President of National RV Supply, a wholesale distribution business serving thousands of RV dealers across the country and Canada.   Johnny retired from Camping World in 2017 after a successful IPO.

His company, Encourage LLC, has various holdings in industries including leadership development, population health management, employee benefits, medical device and genetic testing, insurance and consulting, fashion and interior design, senior living communities, and is currently writing a book with a trusted partner and colleague, Dr. Barbara Fordyce, PHD. He is also involved in residential and commercial development projects in Ohio and Chicago, Illinois including office, retail, event space and investments in several spirit brands such as Angels Envy, Stolen Rum and Heaven’s Door.
‍
Johnny speaks professionally to businesses, communities, and universities on the importance of managing thoughts, internal honest reflection to develop meaningful professional and personal relationships, and re-framing each challenge in your life as an opportunity for self-development and growth.  Addressing college students and young professionals to discover the power they have to develop their personal brand is a personal passion and target audience for Johnny.

Johnny has served as the Chairman of the Board for the United Way of Greater Stark County. He was on the task force to create the New United Way in which he served as the chairman for the campaign and finance committees and consolidated three area agencies. He served as the United Way Campaign Chairman and is the past chair of the Allocations Council for United Way. He is a member at St. Michael's Catholic Church where he has been a Youth Minister for the Life Teen Ministry, Chaired the 2014 capital campaign, and has been a member of a small faith community for over 20 years.    He also served on the board for Quest Recovery Services, Mt. Union College Advisory Board, and many other civic and charity organizations.   Johnny received the Jackson Chamber of Commerce Outstanding Citizen of the Year.

Johnny has been married to his college sweetheart, Susan for over 29 years, and has three children, Beau, Bella, and Stone and they reside in Canton, Ohio and Naples, Florida.

Motivations of the Founder